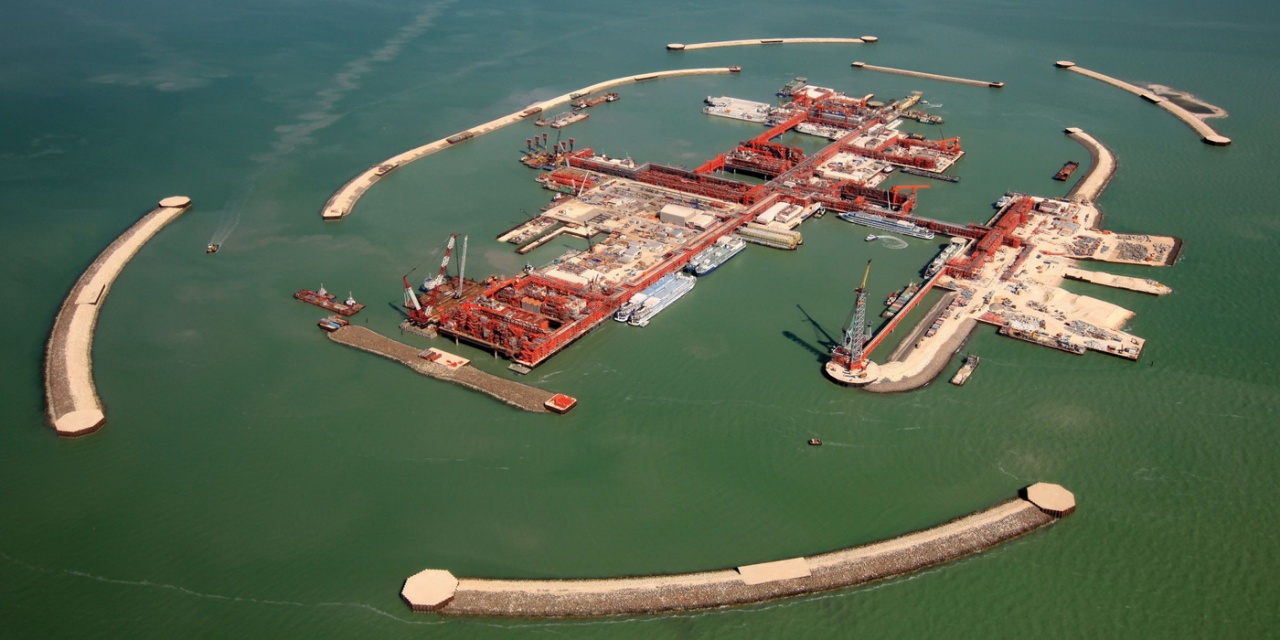 The North Caspian Production Sharing Agreement (NCPSA) was signed by the Republic of Kazakhstan and an international consortium in November 1997. In 1998, exploration for hydrocarbons began in an area of ​​5,600 sq. km.

In 2000, the giant Kashagan field was discovered within the framework of the NCPSA.

The Kashagan field is located in the northern part of the Kazakh sector of the Caspian Sea. The boundaries of the field are characterized by an area of ​​about 75 km by 45 km. Geological oil reserves of the field are estimated at 4.5 billion tons of oil.

The need for a phased development of the Kashagan field is due to the ecologically sensitive area of ​​the Caspian Sea, harsh climatic conditions, the technical complexity of the project, and high requirements for production safety.

The development of the Kashagan field is currently at Stage 1, also known as the Pilot Development Stage.

The Kashagan field development scheme consists of onshore and offshore facilities. Onshore facilities include: the Bolashak Integrated Oil and Gas Treatment Unit (IOGTU), as well as the project of the railway complex in West Esken. Among the offshore facilities, artificial structures have already been erected: the operational and technological complex on Island D, Island A, early production centers on the islands EPC-2, 3 and 4, as well as drilling centers: islands DC-1, 4, and 5 (the facilities of the next stages of the development of Kashagan). In addition, in-field subsea pipelines have been laid.

All offshore structures of the Kashagan field providing oil and gas production, gas re-injection and well drilling are installed on artificial islands. The transportation of oil and gas to the shore will be ensured by means of field pipelines to the onshore complex - the Bolashak oil treatment plant. At the same time, part of the volume of produced gas will be injected back into the reservoir in order to utilize gas and maintain reservoir pressure.

On September 11, 2013, production began at the Kashagan field.

Due to the discovery of gas leaks on the 28-inch gas pipeline, production at Kashagan has been suspended since October 2013. Based on the results of the in-line diagnostics program, external inspection work and laboratory studies, the Contracting Companies made a decision to completely replace the oil and gas pipelines located between the Bolashak onshore complex and the offshore complex. Currently, the North Caspian Project Operator has completed the replacement of these field pipelines re-launching production facilities and the equipment commissioning program.

On November 1, 2016, production at Kashagan reached a commercial level with production of more than 75 thousand barrels of oil per day. On December 7, 2016, the official presentation of the Kashagan field was held in Atyrau with the participation of the Head of State. Since the re-launch of the field, the Operator has been working to increase the production level and stabilize it at a fixed level. As of December 31, 2018 since the restart of production at Kashagan, 22.5 million tons of oil, 13 billion cubic meters of gas and 2.6 million tons of sulfur have been produced.

In the 2nd quarter of 2019, for the first time, the field underwent overhaul with a complete shutdown of production facilities, during which such work was carried out as the re-equipment of two wells of the Island D in the injection fund for injection of raw gas valves and other works to ensure uninterrupted production and increase production from 330 thousand to 370 thousand barrels per day.

The Authorized Body provides comprehensive support to the Operator in the timely achievement of all set goals.

The Operator continues to work on the rest of the fields within the North Caspian project.

Currently, work is underway to select a concept for the development of the Kalamkas-Sea field. At the Aktoty and Kairan fields, the Operator is developing development concepts.

The Authorized Body pays special attention to the development of local content in the Project.

At the initiative of the Authorized Body, in order to develop local content, the Operator is working in the following areas:

the mechanism of “early” tender is being implemented, which provides for the conclusion of an agreement for the supply of products with a postponed period, but with the condition of establishing production in the territory of the Republic of Kazakhstan;

according to the order of the Government, by order of the Ministry of Industry and Infrastructure Development of the Republic of Kazakhstan, a Working Group for the development of oil and gas engineering was created:

An analysis of the range of commercial products purchased by the Operators of projects was carried out and, based on the results, a list of goods was drawn up for organizing a new or modernizing an existing production at the capacities of existing oil and gas engineering enterprises;

A list of domestic producers interested in the production of goods in accordance with the technical and quality requirements of large operators has been determined;

In order to implement this work, a round table was held on the topic Localization of Production of OEM Goods with the participation of the Ministry of Energy of the Republic of Kazakhstan, PSA LLP, NCOC, KPO, TCO, NPP Atameken, KAZENERGY, the Union of Mechanical Engineers of Kazakhstan, KazService and representatives of OEM;

The Action Plan for the development of the oil and gas engineering industry of the Republic of Kazakhstan for 2019-2025 was developed and approved.

In 2019, the level of local content in the procurement of goods, works and services amounted to 52.4%.

Through the implementation of NCOC’s Local Supplier Support Program, more than 330 businesses in Atyrau Region participated in the improvement program. Assistance was provided to over 200 local companies in obtaining international certificates (ISO, ASME, API, NDT, etc.), 2 factories were trained and certified according to the ASME standard and are ready to provide services not only to NCOC, but are already entering international markets. KazArmatura Plant LLP has been certified according to API specification Q1.

Approximately 3,800 employees of local companies have been trained and qualified in vocational skills.

About 3,000 local companies are registered in the NCOC database.

To increase local personnel in the Project and replace foreign personnel with Kazakh employees, the Operator organizes training for local personnel on an annual basis in order to improve their qualifications and leadership skills.

In 2018 and 2019, 85 positions occupied by foreign workers were nationalized.

During the entire time of the implementation of social and investment projects, 214 facilities were built in the Atyrau and Mangistau regions.

North Caspian Operating Company N.V. acts as the Project Operator on behalf of the consortium, which includes the following oil and gas companies with specified shares in the project: